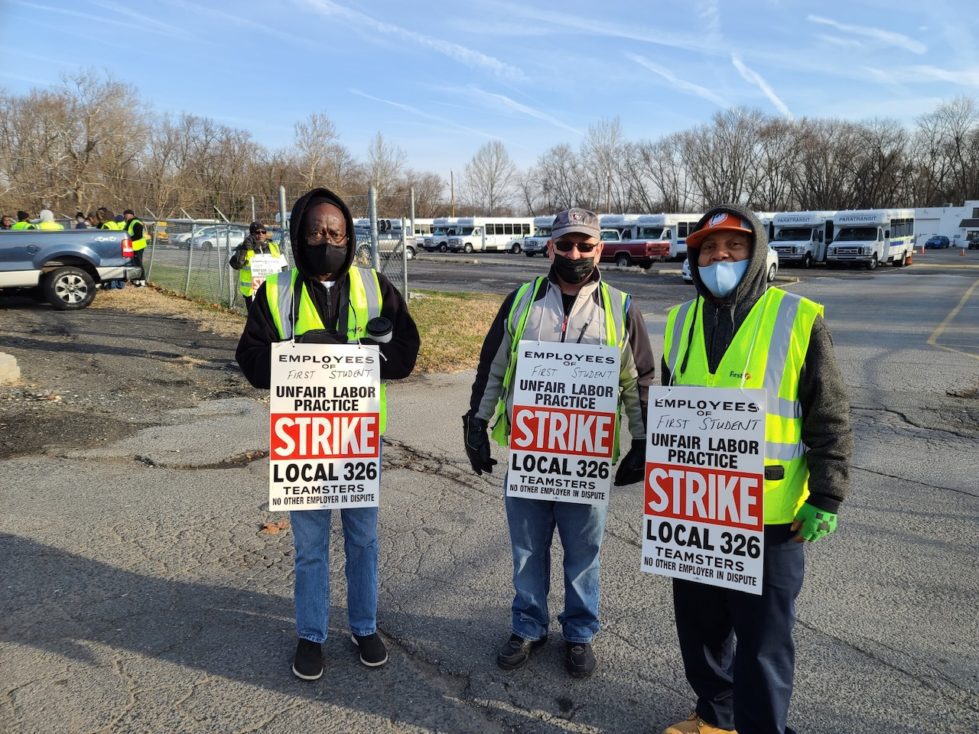 Appoquinimink Schools were working Thursday morning to get all their students into classes after some bus drivers went on strike.

Appo schools planned to stay open, although spokeswoman Lillian Miles said that  New Castle County Vo-Tech high schools had chosen to go to virtual classes as did Christina for Delcastle and Hodson students affected by the strike.

“We reviewed the option of remote versus long delays with families in November and they were very clear that they didn’t want remote,” Miles said. “But that was our community. Vo-Tech only deals with high schools. They’re a different bird.”

The school system told parents in an email Thursday night that it expected First Student Bus Co., which handles 26 routes for the district to strike and would be sending affected families notes about what to do.

All schools were affected, Miles said, because most drivers run two routes during the day.

Efforts were unsuccessful to reach First Student, headquartered in Ohio, for comment.

“This is the last thing we wanted to do, Ok? Nobody wants to be on strike,” Leonard McCartney, Vice President of Local Teamsters 326.

The bus drivers were seeking better pay, a better health care plan and a pension plan in addition to a 401K plan.

Asked what he’d say to the community, McCartney said, “It’s really up to the company. You know, they have to bring something back that these members are going to be willing to accept. Like I said, we’ve been negotiating in good faith. We’ve brought four offers back. They’ve rejected all four. They don’t believe that their requests are being answered.”

Miles said every Appoquinimink school is affected because the drivers from other companies have had to pick up a third route in order to get everybody to school.

“They are heroes and so is our transportation department,” she said. “Everyone associated with education – including our parents – are having to lean in to make this work. Right now, everyone is at a school/campus trying to help out with traffic.”

Some parents said on the Appoquinimink Facebook page that children were being told they would be brought to school an hour it opened and have to stay for two and one-half hours after it closes in order to ride buses.

In the Christina district, all Delcastle and Hodson students were told to complete work at home Thursday as part of a virtual asynchronous day.

Many Christina students do not go to the school nearest them because they may choose another for a specific career path, making busing trickier.

While some Delcastle and Hodgson students may be able to be picked up by a different bus contractor, the vast majority of Christina’s affected students who ride the bus are not, said spokeswoman Alexis Andrianopoulos.

On Friday, the students will follow their normal class schedule, whether they come into the building or are at home.

“We are hopeful that the contract issue will be resolved quickly so that we can welcome all of our Delcastle and Hodgson students in the buildings,” she said.

The system hasn’t yet firmed up plans past Friday, she said.

General Assembly Democratic leadership weighed in on the strike strongly in support of the drivers.

Senate President Pro Tempore Dave Sokola, Senate Majority Leader Bryan Townsend and Senate Majority Whip Elizabeth “Tizzy” Lockman pointed out that the 60 drivers has been negotiating for months when they voted offer 27-23 to strike in a “difficult vote.”

“Unfortunately, the dispute between local drivers and the private, Ohio-based contractor  who employs them has led to temporary disruptions and understandable frustrations for many families in the Appoquinimink, Christina and New Castle County Vo-tech school districts,” the legislators said in a statement. “Please know, the bus drivers have been negotiating for months to avoid this exact situation. In many cases, these drivers are parents and grandparents themselves, and are doing what they believe is necessary to adequately provide for their families.”

The bus drivers deserve fair working conditions, affordable health care and the knowledge they will be able to pay their bills after retirement, the legislators said.

“And, just like you, they want this situation to be resolved as quickly as possible so they can get back to work,” the statement said.

Bryan Shupe contributed to this report.