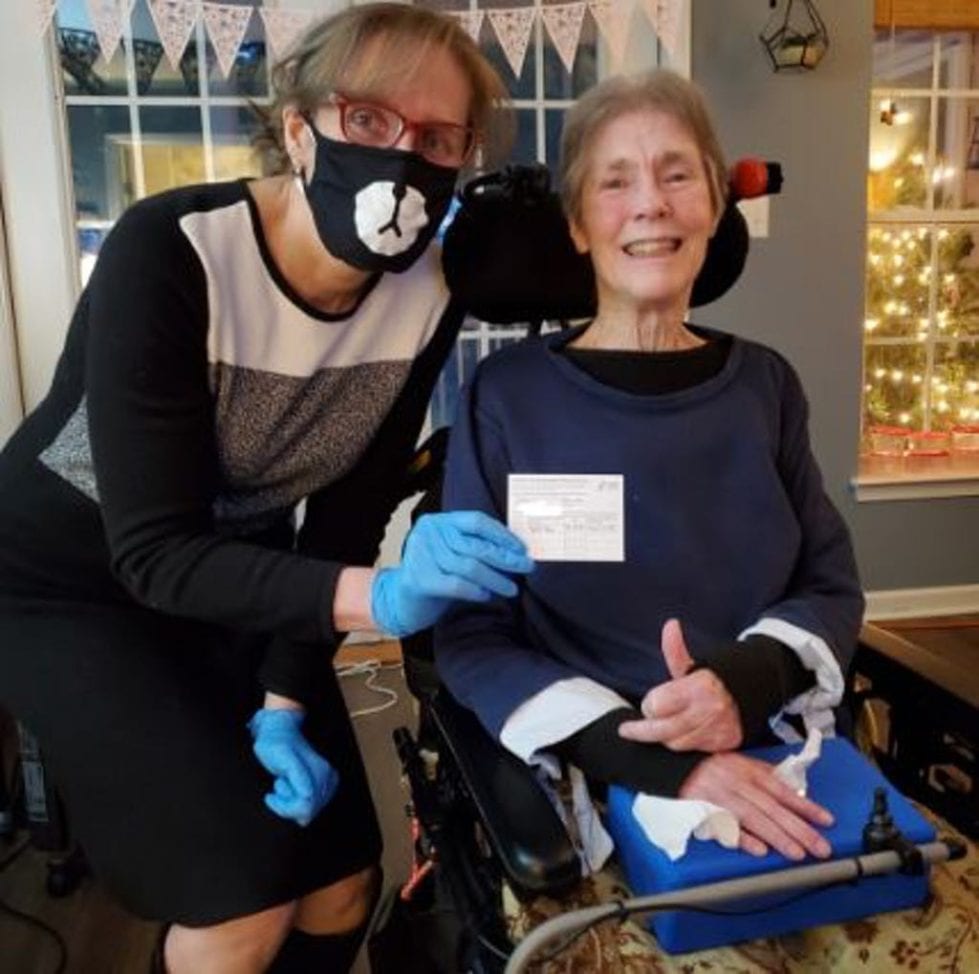 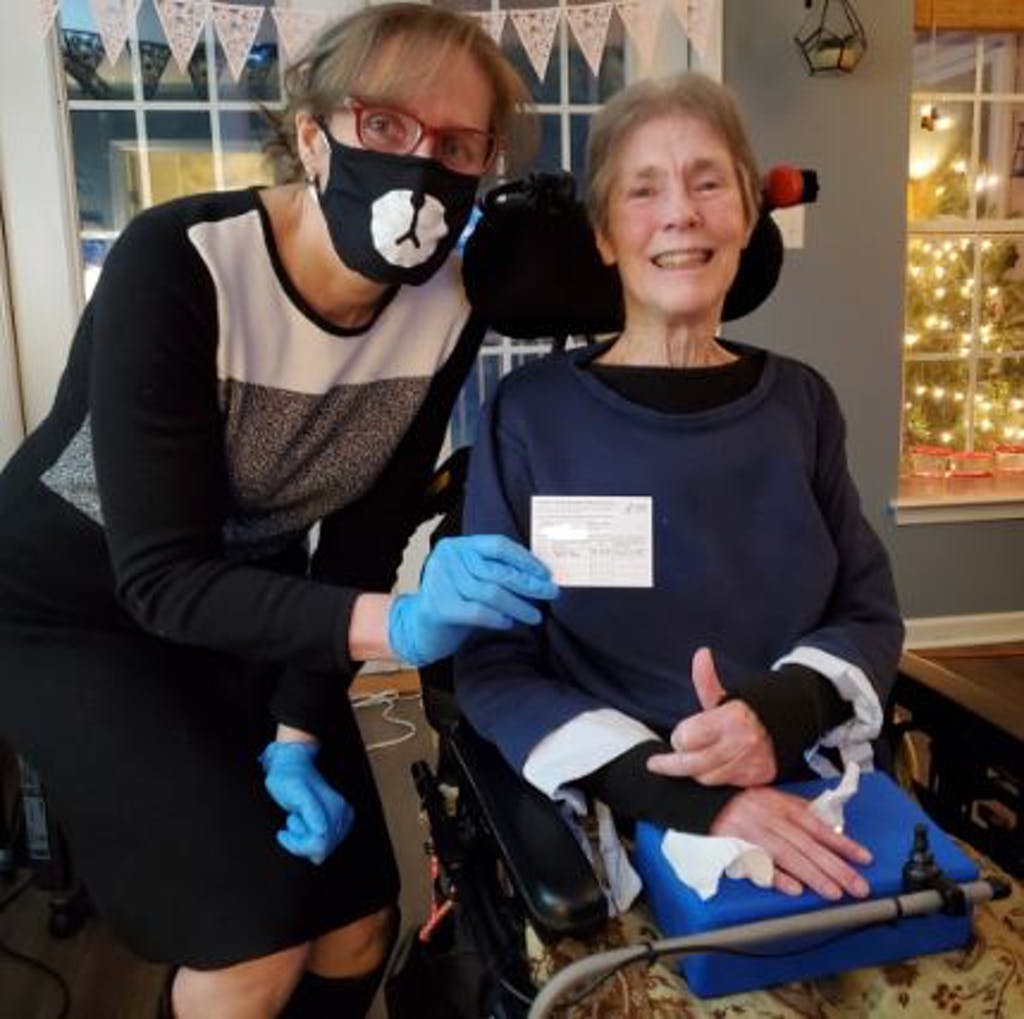 Joanne Henry gives a thumbs up after Dr. Christine Degnon made a house call to give her the COVID-19 vaccine Tuesday.

Delaware primary doctors received their first shipments of COVID-19 vaccine for patients Tuesday, ending weeks of frustration about what was going on with that medication while public health officials repeatedly told people to call their primary care doctors for help.

Anxious to start inoculating their patients, those doctors immediately found a new frustration: Many patients who asked to be on their lists already had gotten a shot elsewhere.

Dr. Christine Degnon of Coastal Direct Primary Care in Lewes, who received 100 doses of the Moderna vaccine, said 40 percent of the patients she called Tuesday to schedule their shots told her they had gotten one from another source.

Even so, she said, “But the end of the week, I will have vaccinated 100 percent of my patients over 65 that want it and are in town. And a few spouses that are phase 1B but not my patients are getting it in my office, too.”

Now, she said, the patients are asking questions about getting their second doses.

Degnon was one of the many primary care doctors confused about what was going on in what another doctor called “The Hunger Games” of vaccination.

As Delaware began receiving the Pfizer and Moderna vaccines in December, the drugs went first to hospital partners and nursing home staff and residents, considered the 1A phase of vaccination. Primary care doctors with their own practices were given instructions on how to apply online to get shots for themselves and their staffs.

The doctors were also steered to a complicated application process for “vaccine partners” that included questions that required detailed answers, such as what kind of freezers they had, complete with the serial number on the back of the freezer. The Pfizer vaccine has to be kept frozen at much lower temperature than the Moderna ones do. Once unfrozen, they must be used quickly to be effective.

Degnon signed up as soon as she could.

State Public Heath officials pleaded for patience in calls with doctors sponsored by the Medical Society of Delaware and in Carney’s weekly COVID-19 press conference.

But Degnon grew frustrated listening to Gov. John Carney and state officials tell people to reach out to their primary care doctors for help with shots, when the doctors had no useful information.

She aired her grievances on Facebook last week in a message targeted to Carney: “PLEASE stop telling people to call their primary care docs. Unless, of course, you are going to start sending us vaccines. I don’t have any more information than is available to the general public. I have no inside scoop on  how you can get your vaccine.”

On Tuesday, she was delighted to have the 100 doses shipped directly to her.

That’s what Dr. Matthew J. Burday, the Medical Society of Delaware’s president and an internal medicine hospitalist at ChristianaCare, planned to tell a doctor who had called him Tuesday upset over the situation. Burday was thrilled to hear that some doctors were getting patient vaccine at their offices.

He says the state is trapped between demand and the small amount of vaccine allocated to Delaware by federal authorities. That small amount has to be split up among different groups, and it’s now being administered in large vaccination events, as well as smaller events sponsored by hospitals, federal health care centers, pharmacies, Vault Healthcare and Curative.

The state is delaying second shots in favor of getting as much vaccine into the arms of people as possible. In addition, the state realized this week that only 8 percent of the vaccine administered already has gone to minorities, and it is mounting a campaign to get more into those populations. That drive is expected to include medical practices who are in underserved and minority areas.

One bright turn of affairs: Carney said this week that the state is expected to get 22 percent more vaccine for the next few weeks. It’s now getting between 15,000 and 22,000 doses a week. (How much the state gets and how much is administered can be tracked here).

Burday says physicians who say it was hard to understand what was happening have a legitimate complaint about the way the rollout has been handled.

“They really didn’t have a good plan in the beginning, I think,” Burday said Tuesday night. “I think it’s gotten a lot better now … but I think there are problems in various parts of the state and it’s still problematic. It’s just so hard to understand why.”

He said he had been on a number of calls with the medical society, Carney and the hospitals.

“I think DPH also really was very frustrated,” he said. “It’s a supply thing. We don’t have enough vaccine.”

But Degnon said what bothered her most was the lack of communication, which made it seem like there was not a strong coherent plan. Burday said she’s not the only one who thinks that.

He’s been delighted to hear that there will be more vaccine, that it’s finally coming to primary care practices and that more will be going out into the community.

“It does appear that systems are in place to really get people vaccinated,” he said. “Those systems and partnerships were just not in place weeks ago. So I’m hoping and I do feel that things are going to get better.”

Burday said he planned to tell the doctor he was going to talk to that he will get his vaccine.

“I’m not going to be able to tell him a specific answer regarding when,” he said.

He expects more primary care practices to register for vaccine, and more of the ones that have registered to get vaccine.

“This doctor was very concerned about the fact that the hospital systems had been early on getting vaccines while primary care did not, and he still feels that way,” Burday said. “I do think there are probably other primary care practices that feel similarly, that are kind of still burning about the fact that the hospital systems were provided vaccine early and they were not.”

But there are also good reasons for not sending a lot of vaccine to primary care offices, he said.

Most have smaller rooms and spaces, which would mean that large amounts of vaccine could not be given quickly, he said. In addition, people given the vaccine are asked to wait for 15 minutes before leaving to be sure that they won’t have a bad reaction to the vaccine. In most practices, he said, it would be hard to socially distance patients waiting that 15 minutes from people waiting for the shot.

In addition, he said, many practices could not handle storing the Pfizer vaccine. That could mean that the Moderna supply must be split even more ways.

Burday says he’s hoping that the Johnson & Johnson vaccine, which only requires one shot, will be available soon. That would speed up logistics while protecting people from the coronavirus.

“It’s going to definitely be protective, I think, especially for warding off severe illness,” Burday said. “I think the word is generally going to be to take the vaccine you’re able to get. … But at this point, I’m not sure people are really going to have a choice.”

His first shot was Moderna.

“I was not able and have not been able to get the second shot because of supply, and I’m overdue,” he said. He believes it could be six weeks or longer before he gets it, because of supply issues and state priorities.

Degnon said she ultimately was delighted so many of her patients had already been vaccinated before she got her drugs. It has allowed her to make sure even more of her 1B patients will be covered.

She said she could hear the relief in the voices of those patients who already had it, and those she called to schedule to come to the office.

Degnon said she plans to ask for more and hopes to be able to help vaccinate some of the minority and hard-to-reach groups the state is talking about.

“I’ve offered to vaccine the local homeless shelter at Troop 7, but they said we’re not there yet, and they are not in the current phase 1B,” she said. “As long as they’ll keep sending the doses I’ll keep vaccinating my patients. And if I get through all of my 65-and-older patients, and I have extra doses, I’m certainly not turning anyone away in the community as long as it’s the appropriate phase.”

Degnon makes house calls for some of her patients who are not able to easily get out.

One of those Tuesday was to give Joanne Henry of Lewes her COVID-19 vaccine. Henry was thrilled to get it, and agreed to pose in a photo afterward with the hope that it will encourage others to get their shot.