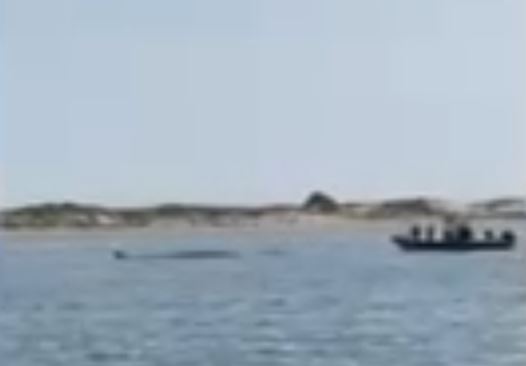 A 46-foot finback whale got caught in low tide near Lewes. Photo by Cape Water Tours and Taxi

Lewes gets many different visitors during the summer, but this one may be the largest.

A 46-foot fin whale was stranded inside the breakwater near the East End Lighthouse on Thursday morning, due to the low tide.

Captain David Green with Cape Water Tours and Taxi captured video of the rare sighting, a real treat for those booked on a morning dolphin watching trip.

The Delaware Department of Natural Resources and Environmental Control said a few of their boats and crew were around the whale to ensure its safety.

The whale was free to go back out to sea once the high tide came in around noon, but it did not.

There are about 10 species of whales that wander the waters of Delaware and the Atlantic Ocean.

Fin whales, also known as razorback whales, are the second-largest whale species in the world behind the blue whale and can grow up to 85 feet long. They were nearly hunted out of existence but have steadily made a recovery.

It’s still listed as a vulnerable species by the International Union for Conservation of Nature because its habitats are changing, which threatens its existence.

The Merr Institute posted these photos of the fin whale in the Lewes breakwater.

The Merr Institute, a Lewes non-profit that offers stranding response and rehabilitation for marine mammals and sea turtles, said on its Facebook page that the whale was stranded on a sandbar on the bayside of the Point at Cape Henlopen State Park.

It said the whale had moved off the sandbar and closer to shore rather than to deeper water and appeared to be struggling and in the process of beaching itself.

Biologists were monitoring the animal and NOAA was working with stranding partners to develop a response plan, which includes options for palliative care, sedation or euthanasia, Merr said.

“We do not know what has caused this whale to strand, but when large whales come close to shore like this, there is usually an underlying reason like injury or disease,” the post said.

“Sadly, in situations like this, there is often very little we can do to help save the whale; returning the whale to deeper water–which is a challenge under the best of circumstances for animals of this size and weight–would only prolong its suffering and it would likely strand again, he post said.